A downloadable game for Windows

A story-driven action-adventure, following Arietta on her journey to unveil the mysteries of the Spirit Realm.

Immerse yourself in an adventure filled with emotion and surprising turns while taking on dangerous foes in a fast paced combat!

The game tells the story of Arietta and her family, visiting their Grandmother's cabin for the first time after her passing away a year prior.

However, the family trip takes an unexpected turn when Arietta meets a mysterious new friend and gains the ability to see the strange beings that inhabit the island.

In order to download this game you must purchase it at or above the minimum price of $14.99 USD. You will get access to the following files:

Can we please have a Linux version of this game?

I saw this on ReadySetIndieGames and just had to get it!

I have been following this game from the very first demo.
I finally bought it on Humblebundle for a discount, played through
it, and have to agree with the criticism I've seen several reviewers
give in that the game is simply too short.
I was emotionally engaged throughout!
The story was great, the characters and world was great, the
gameplay was great.... Everything was great!!!
Except for the fact it was too short!
After beating the final boss I expected there to be much more
left but then... Bam. The end?

All I can say to the Third Spirit Games team is this:
You have an excellent game engine already built.
An excellent world and characters and gameplay.
Please give us more content.
I waited for this game for so long, it was kinda disappointing after all
this time for it to have been so short.
Maybe you can do the "3 years later" sequel as a DLC or content
addon pack???
It seems like it would be a waste to make us wait for another year or
so for an entire new game to be made when I don't feel half the
mileage has been squeezed out of this one yet.

did a new 4K gameplay of the demo.
Love the Demo can Recommend this game.

my gameplay of the demo

Amazing game. Loved it! I loved every frame. One of the best games I have ever played. :)

Will Arietta release here on Itchio as well?

Yes! We are working on it !

It's now available here on itch.io as well!

Will Arietta of Spirits be released on mobile?

No plans for a mobile port at the moment.

whaaat, i thought this was monster collecting pokemon style :(

Hi! I am interested in playing this game but when I click Install, it shows an error message saying "Cannot  read property build of undefined." I play games on my laptop which has Windows 10 and is up-to-date. I dunno if this information will be enough to resolve this issue. I have just started playing games on laptop, so forgive me if the error is because of my device and not the game.

Been waiting for this ever since the earliest demos! 8)
Will there be a LINUX version? (I hope so please!)

There probably won't be a Linux version, at least for the launch... But from what we have heard the demo works fine on WINE, so hopefully the full game will too, but this hasn't been "officially" tested!

Yes, the demo works fine on WINE. 8) But it's always nice to have a native build.
If you need someone to test Linux, I'd be glad to help. 8)

Closing in on the full release we decided to remove the demo.  It is still available on Gamejolt for the time being if you really want to try it.

I just ordered my physical copy of Arietta of Spirits for PS4 and I’m so excited that I can’t wait to play.

Will physical copies have the same release date as digital ones?

this is one of the best demos i play, good gameplay, good graphics, mechanic like those of a zelda game, everything is wonderful about this demo

I will give a resume of the game( sorry about my english, i am brazillian) probably have spoilers Feedback: the game is very good with design and musics very well made with some bugs wich doesn't affect in the gameplay, the history is very generic but something is kinda different, i dont know what but is, the enemies are normal but they all have the same paterns with ne being more fast and the other leaving a trail of black thing wich deals damage, the bosses are very simple and they have very like each other, they attack somethimes, you attack him, he release some, minions, you kill the minions and this repeat until you defeat the boss, they are simple but very hard because of the gameplay, except by one fact the gameplay is very well programed, the fact is that if you is attacking and you click to turn to other direction you dont attack there, you still attacking in the other direction and when you aren't attacking there is a delay to turn around Bugs: every character( enemies and npcs) start to flicking when they are walking in cutscenes and in game What should change: the patterns are the same in every enemie, you should make some other attack stile, like charge to you and jump back or be running around you and in some moment he attack you and the same for the bosses Ideas: ya shoudl make in some time of the game your character learn to go parcialy to the other world of the game to do some puzzle, and the game should have puzzles cuz just attacking enemies is kinda boring, the game history is given to you without you do nothing, ya should do more npcs and they tell the history of the game in an non directly form and the game should have a music instead of an back sound to make some fans buy an ost or enjoy more the game That is my oppinion, my final note to the demo is 9/10 but it will propably rise( cuz this is a demo), love the game, kisses from Brazil tchau, e até mais seres humanos maravilhoso (Bye, and see ya amazing humans)

Just wanted to say I played through the DEMO a year ago and enjoyed
it very much. Just picked up the latest DEMO and played through it
again and the game has not lost any of it's charm! I love it! 8)
It played great on LINUX with WINE but a native Linux version would
be awesome if possible! Definitely will be buying this when it's out!
Something about the story and pace really hits home with this.
Hope the release will be soon!

Hey any updates on the game?

What a wonderful and charming story in a great game. The love put into this is palpable. Can't wait.

Hi. I created an account just to say that this game looks like a lot of fun and I hope to be able to play it on my Playstation 4 or 5 in the near future. Great work guys.

I guess we’ll have to see what the future brings.

I finished the demo some months ago, and OMG THIS GAME IS INCREDIBLE!! excited wating for the finished product :)

Please make a Mac version, I would love to play your game.

We will finish the PC-version first, but a mac version is not out of the question.

cool, I hope your game works out!

Not sure what a ye is sorry.

this is super good

i like itt so muchhhhh pls complete the game

Thank you! :) The full game is almost completed!

This game was absolutely fantastic. Well put together with a nice wholesome story, a good atmosphere, and beautiful art. Great job!

Yes, the full game will be available here too :)

Unfortunately, at the moment, we still can't give a release date just yet.

The good news is, however, that we are working on finalizing the last chapters of the game. We've also taken players' feedback into account from the demo and added some extra stuff to the game that we didn't plan on initially doing, so this has set us back a little bit timeline-wise.

Once we settle on a release date, we'll be sure to let you know! :)

Just after playing to the first boss fight this is some immediate feedback for the dev/s:
1. Why can you run diagonally but cant stand diagonnaly, would make fighting a lot more fun and less agitating because your enimeies have omnidirection in both attacks and movement but you dont really?
2. Graphics and fighting are simplistic but amazing.
3. fighting is the right difficulty but has some agitating factor
4. Story hooks you in immediately, I want to play more and cant wait for the full thing
5. Text speed is sorta slow for me atleast and many conversations could be summarised

Will you develop this game for Linux?

This game os sooooo good, I made a video about it (in Portuguese)

the story is very good as well, I really like the combat scenes where you defeat enemies right on the map

This game looks fantastic. The art, story, characters and gameplay are all excellent. Sooo looking forward to the release.

Can't we just claim it?

Long story short, I love Zelda games, and this is a great take on that kind of style of game! I'm intrigued in the story and the game world.  I was a bit apprehensive about the modern day setting, but the fantasy theme seems to be alive and well regardless.  The speech style reminds me a bit about Stardew Valley as well.

Here's my first part of my two part playthrough for this demo :)

The game looks and plays fantastic, although I have some nitpicks.

But besides that, the soundtrack, art and gameplay are amazing, and I'm really going to get into this game.

Giving the character animations and attacks for when holding two direction keys, for example if you are pressing up and left, it would look better if there was an animation for going that direction.

I feel that movement style is to be reminiscent of Link to the Past and other top down Zelda games.  Since it always prioritized the first movement for direction and then the diagonal for the strafe I'm pretty sure. 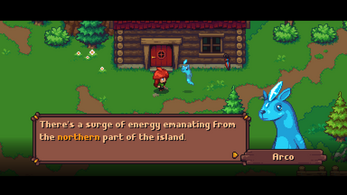 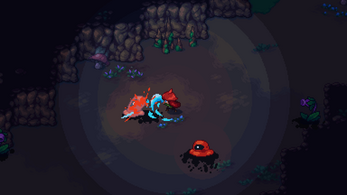 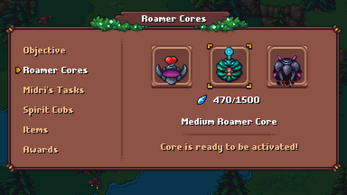 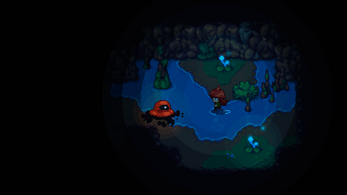 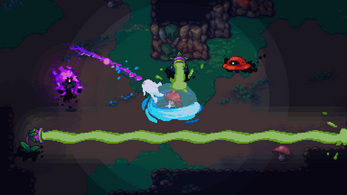 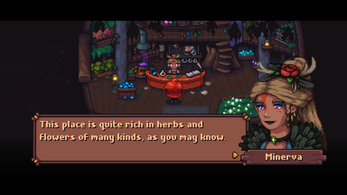 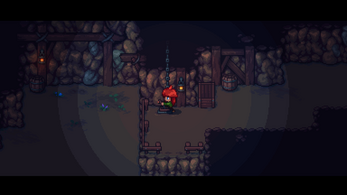 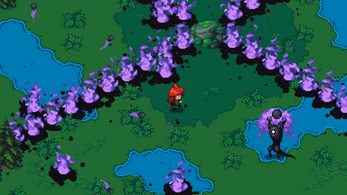 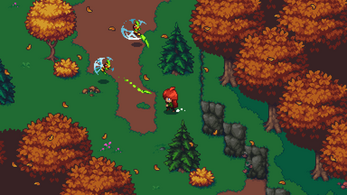 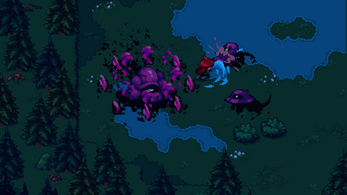 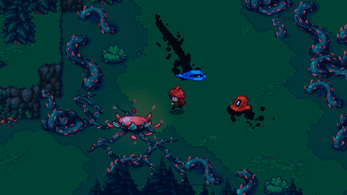 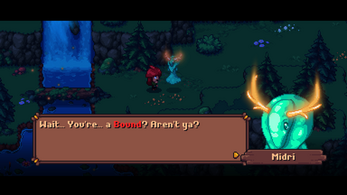 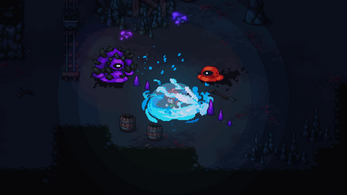 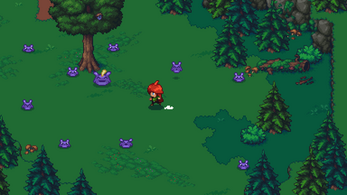